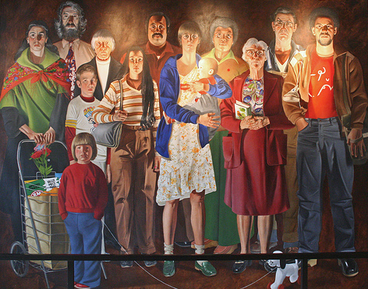 Heather is originally from Amherst, Massachusetts. At the age of 5, she was one of the subjects of Alfred Leslie’s famous “Thirteen Americans” painting (pictured). Mr. Leslie lived down the street and was looking for an androgynous looking child. With her bowl haircut and tomboy clothes, she was the perfect fit. She had to stay completely still, was dressed in black trash bags, while he played with the light for hours. Although this was a challenge for a kid with an unlimited amount of energy, she did it and it sparked a lifelong love for the arts!

Performing with a local children’s chorus is Heather’s earliest memory of singing. Her first introduction to theater was a production of Peter Pan where she played a Spriggan (a.k.a. an Indian). Heather’s father, Frank, is a local Western MA actor and they loved to perform on stage together during those years.

She majored in theater at the University of Massachusetts and studied music at University College Cork in Ireland. The day after graduation, she left for a National Tour as an actor/director with a children’s theater bringing musicals into communities deprived of the arts. After putting thousand of miles on the tour truck, she moved to New York City where she appeared in numerous productions in and out of the city, as well as television, film, commercials and print.

After 12 years in NYC, Heather moved back to her home state of Massachusetts. She now lives in the Boston area with her chef husband, their two adventurous boys and sweet, loyal dog. She is a proud member of Actors' Equity Association and SAG-AFTRA. She is also the founder of Songful Artists.

She is grateful for this life and looks forward to the exciting projects ahead.